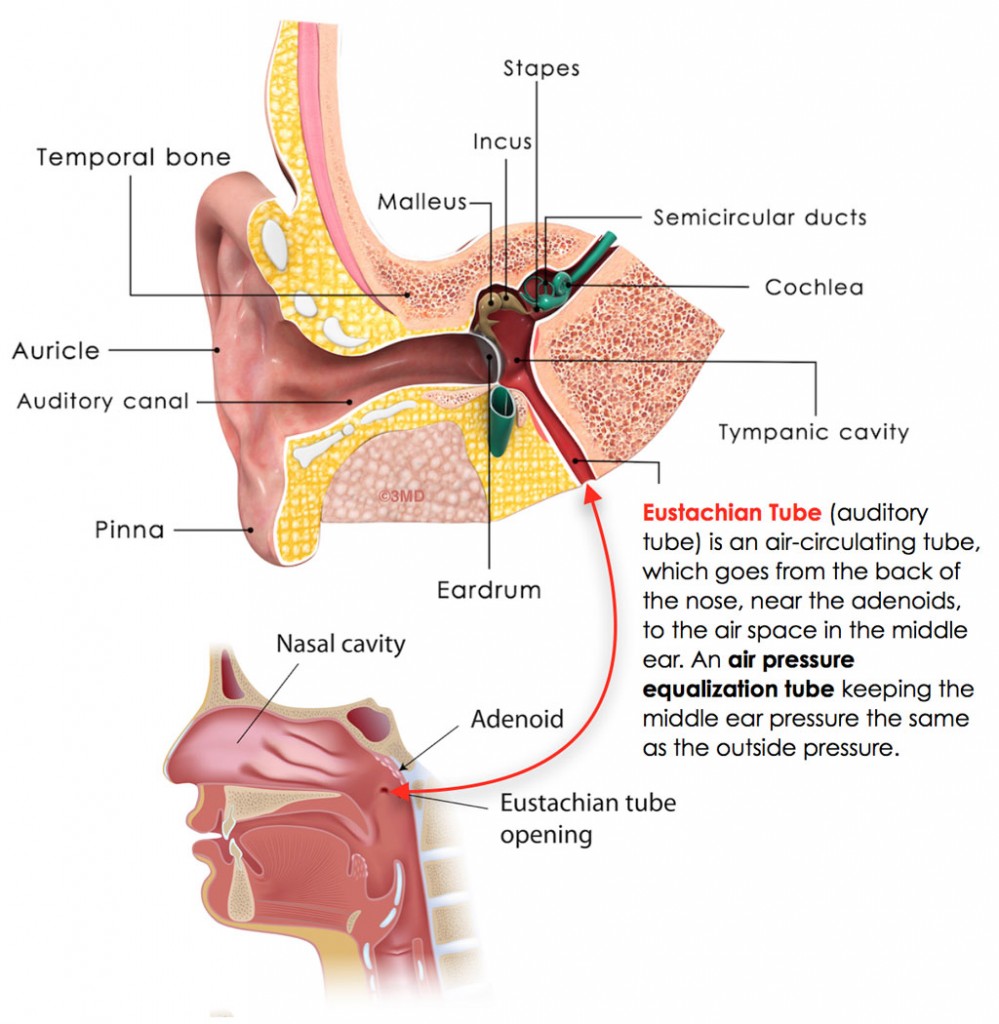 Anatomy of the Ear

There are 3 principle parts of the ear:

The “eustachian tube” is important in the development of ear infections. This is an air-circulating tube which goes from the back of the nose, near the adenoids, to the air space in the middle ear.   The function of this air circulating tube is to keep the air pressure in the middle ear space the same as the air pressure in the outside world around us. For example, air circulates through the eustachian tube when we go up or go down in an airplane so that we don’t have pressure abnormalities and ear pain.

When the eustachian tube is swollen shut and unable to circulate air, fluid builds up in the middle ear space creating otitis media.

What is an Ear Infection? 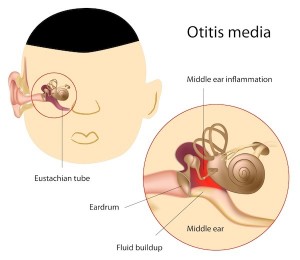 The diagnosis of an ear infection is made by noting typical symptoms, listed below, and by examination of the ear. The middle ear fluid can be seen on examination because the eardrum is see-through. The eardrum may also be bulging.

A pressure test of the eardrum, called “tympanometry”, can also be used to diagnose ear infection.

What are the Causes and Risk Factors for Ear Infections? 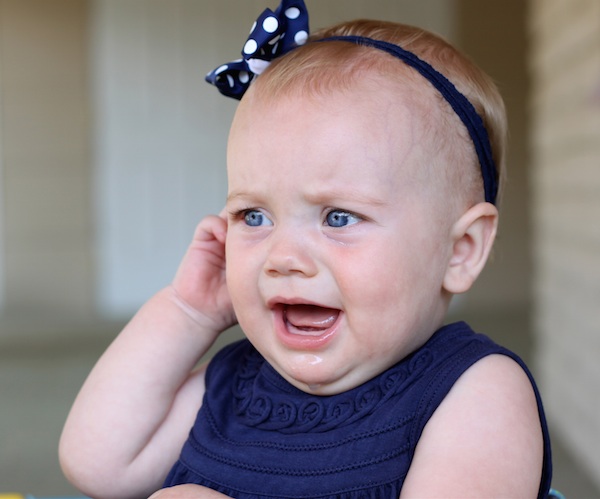 Symptoms of an Ear Infection

The most common symptoms of an ear infection include fever, fussiness, excessive crying, poor appetite, poor sleep, ear pain, hearing loss, and difficulty with balance. However, if fluid only is present (OME), the only symptom may be hearing loss, which children don’t often complain about. These symptoms should prompt a visit to the doctor. Without appropriate evaluation and treatment, an ear infection can cause long-term or even permanent hearing loss.

Ear drainage and ear swelling can be symptoms of a complication from an ear infection. These symptoms require immediate medical attention.

Consequences of an Ear Infection

Whenever there is fluid of any kind (pus/water/mucus) in the middle ear space, hearing loss is present. In patients with frequent ear infections or persisting ear fluid, hearing loss can frequently lead to speech delay or learning capacity problems.

Complications can occur from ear infections. These include high fever, hearing loss, eardrum perforation, bacteremia (bacteria gain entrance to other areas of the body), and other more serious complications. Symptoms or suspicion of an ear infection should prompt a visit to the doctor. 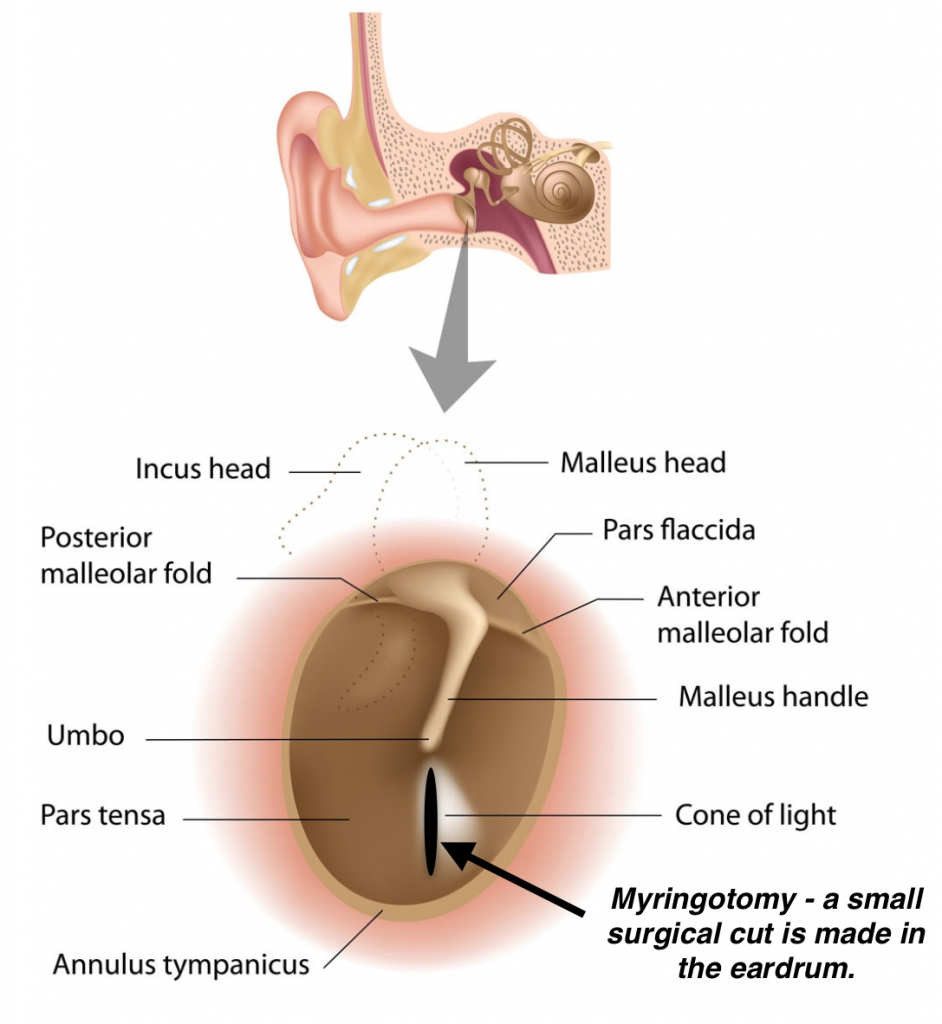 Treatment for ear infections varies from measures to help reduce fever and pain, a period of watchful waiting, oral antibiotics or antibiotic shots, and ear tubes. It is always important to follow the doctor’s recommendations for treatment, and to schedule a repeat examination to be certain that the ear infection and ear fluid have been cured.

Acetaminophen (Tylenol) or ibuprofen (Advil/Motrin) may be recommended by your doctor to reduce fever and/or ear pain. Often a warm towel or low-temperature heating pad applied to the ear can reduce pain. Sometimes prescription ear drops can reduce ear pain.

When children have recurring ear infections, multiple ear infections over a short period of time, hearing loss, or fluid that persists in the ears for 3 months or longer, they will often be referred for a consultation with an otolaryngologist (ear, nose, and throat doctor). Your doctor may discuss and recommend pressure-equalization tubes, commonly known as “ear tubes”. Ear tubes result in a decreased frequency of ear infections and resolve the middle ear fluid, which had been creating hearing loss. They function by circulating air through the ear tube into the middle ear space and preventing buildup of fluid.

Ear tubes are performed in a very short surgical procedure called “myringotomy and ear tubes”.  A small incision is made in the eardrum and any middle ear fluid, which is present, is suctioned out, and the tube is placed into the eardrum. Through the ear tube, ear drops can be applied to cure the middle ear inflammation and avoid exposure to additional oral antibiotics. The ear tubes will usually fall out after a period of time, and the eardrum heals.

Audiologists, Mary Gamble and Lisette Jackson, Au.D., CCC-A , Dr. Heena Peshwani and otolaryngologists, Dr. Rohn, Dr. Gamble and Dr. Kubala of Otolaryngology Specialists of North Texas are highly experienced and uniquely qualified to identify a wide variety of pathology and underlying medical conditions of the hearing and balance systems. If you would like to schedule an appointment with our office, please call our Plano office at 972-378-0633 or Dallas office at 214-239-1641.

Board Certified in Otolaryngology (ENT) and Head and Neck Surgery 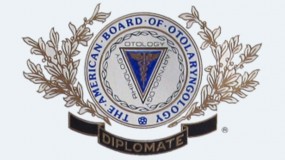 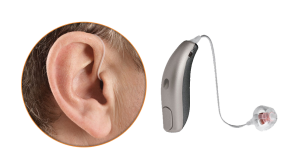 Hearing Aids - Plano and Dallas If you think you might need a hearing aid or to visit a hearing doctor, Otolaryngology Specialists of North Texas hearing doctors and audiologists offer testing to determine if hearing aids will be beneficial. Your evaluation will determine if you are one of approximately 5% to 10% adults with hearing problems that … END_OF_DOCUMENT_TOKEN_TO_BE_REPLACED 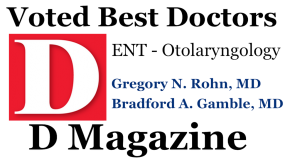 Once again, D Magazine has put together a list of the "Best Doctors”. Dr. Bradford Gamble and Dr. Gregory N. Rohn have been voted “Best Doctor” again. How are D Magazine Best Doctors Selected? Each October, D Magazine publishes a comprehensive list of the best doctors that are chosen by their peers. The … END_OF_DOCUMENT_TOKEN_TO_BE_REPLACED 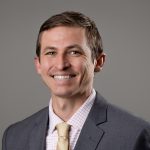 Michael E. Kubala, MD We would like to welcome Dr. Michael E. Kubala to our practice, Otolaryngology Specialists of North Texas. Dr. Kubala sees patients at both the Plano and Dallas offices. Dr. Kubala performs surgeries at Children's Medical … END_OF_DOCUMENT_TOKEN_TO_BE_REPLACED